Properties of Circles
PROPERTIES OF CIRCLES 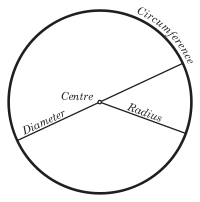 Chords
A chord of a circle is a line segment whose two endpoints lie on the circle.
The diameter, passing through the circle's centre, is the largest chord in a circle.

Tangent
A tangent to a circle is a straight line that touches the circle at a single point.

Secant
A secant is an extended chord: a straight line cutting the circle at two points. 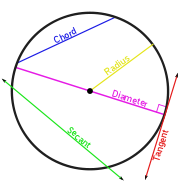 Arc
An arc of a circle is any connected part of the circle's circumference.

Sector
A sector is a region bounded by two radius and an arc lying between the radius.

Segment
A segment is a region bounded by a chord and an arc lying between the chord's endpoints. 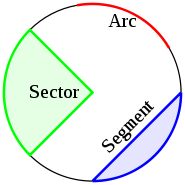 
Angle Properties in a circle

Angles in the same segment are equal.

∠A and ∠B are equal.

Property can be abbreviated as Ðs in the same segment.

Angle at the centre = twice the angle subtended by the same arc at the circumference. 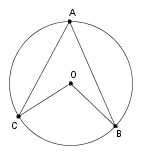 Angles in opposite segments are supplementary. 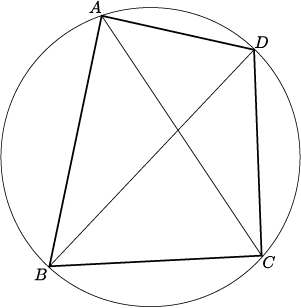 Property can be abbreviated as opp. Ðs of cyclic quad.

Exterior angle of a cyclic quadrilateral = the interior opposite angle. 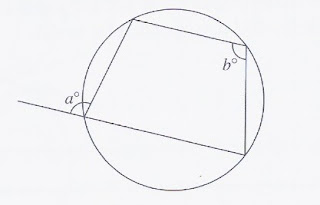 
A circle is symmetrical about every diameter. Hence any chord AB perpendicular to a diameter is bisected by the diameter.

Also, any chord bisected by a diameter is perpendicular to the diameter.

Since these are adjacent angles on a straight line, OĈA = OĈB = 90°

In the figure, triangle OAB is rotated through an angle AOA' to triangle OA'B' about O.
Since rotation preserves shape and size, AB = A'B' and OG = OH. 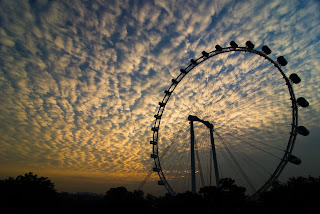